Talismans of the hours construction.- Hygro.

The evocation of the hourly angels are strictly to be concerned with giving virtue to the talismans in which you make in their hours. The talismans themselves are never shown, however there is some description to it which varies by the grimoire. Essentially you write what you want which is according to the virtue of the planetary hour, then you fold the parchment/paper once and draw the seal on the front. Although it sounds simple, complications arise when you try and go too far into the practice.


Firstly let just talk about the talismans themselves. The name of the angel varies from version to version and as discussed I will be going over some translations to clear this up, but whether the name ever goes on the talisman or just in the evocation remains unclear. Then of course there are the characters and seals which appear on the talismans. The seal of the planet (not of an angel) is to be written on the front of the talisman, once it is folded over, whereas the characters are written inside along with what you want. Three versions of these seals and characters exist in Ioannis publication, one in Harleianus and twos version in Atheniensis 1265 for no explained reason. Further characters are given in Monacensis which seems to leave the seals absent altogether. The seals are not alike. You simple would have to pick one in practice and hope it's the correct one or use both and hope it doesn't confuse things. I would hazard a guess that the scribe of Atheniensis 1265 was copying from more than one manuscript and they already had two different versions which is why he included both.
There is also the case of the magical alphabet. The alphabet itself is a stylised Greek (the grimoire mostly being written or rewritten by a Greek hand.) It is as Greek as Celestial is Hebrew or Theban is pre-Iranian ie. It's the same just a bit more fanciful. Saturn and Mars use one Alphabet, Venus and the Moon another and Mercury and the Sun another. Jupiter has its own for seemingly no apparent reason. Whatever the case, you are supposed to write the request (and spirits name?) on the talisman in the correct alphabet. Seeing this and the seal the angel will grant you his virtue to the talisman. Atheniensis 1265, Atheniensis 115, Petropolitanus 646 and Bernardaceus all include alphabets, but sadly Ioannis Marathakis publication only includes one version from Atheniensis 1265 and a partial from 115 so I am unable to compare them. Regarding the two given they match fairly well however.


There are also specific inks and incense which are to be made for the individual planets. These vary and you may as well just use inks or planetary incenses given in other grimoires.
Posted by Ash' Bracken | Tolka Scrolls at 13:37 No comments:

The first 6 angels of the day of Jupiter.


Notes:
Concerning the differences between manuscripts the supposed oldest seems to be the most likely, with some of the latter versions seeming not to be words at all. I hypothesise it may not always be corruption but coding the names. Whatever the case the names seem to travel between Greek and Hebrew. Harleianus itself leaves some hours blank so it may be that not all of the hours had angels or where too corrupt to follow from whatever the scribe was copying it from. In other places it is clear that the scribe has simply put angels in with his own language. This begs the question whether the manuscript was Greek and turned Hebrew or Hebrew and turned Greek. I would imagine it was originally Hebrew and this part at least not of Greek origin.
Because of the variations between names there are some puzzling hour purpose changes too. As I had said before those who have names and hours are Harleianus, Gennadianus and Monacensis as opposed to Atheniensis 1265 and Bernardaceus who have no hours purposes and differ on name translations because of it.
One such puzzling angel is that of the 6th hour of the day of Jupiter. His name is Imeel which seems Jewish and translates roughly as Near/Besides God. The hour is for reconcilling with enemies at noon. (noon because it just happens to be the sixth hour) In an unlikely turn of events for once Gennadianus and Monacensis don't agree with Harleianus and instead, along with Atheniensis 1265 and Bernadaceus give versions of an angel in the Greek language. The angel is Mnimi-el. Mnimi in greek translates as Memory so Memory of God. It is strange that all manuscripts listed have abandoned the idea of Imeel although Ime could have been expanded to Mnimi for some reason. The hour's purpose then is also listed differently from Harleianus's reconciling and instead is given as changing residence. Why they have changed the angels name to Memory of God, and changed the purpose but to something that doesn't match the new name I have no idea. Perhaps this is an error in my translation of Mnimiel?

Posted by Ash' Bracken | Tolka Scrolls at 21:37 No comments:

The use of crystals in magic

Taking a break from the Hygro before I've written much on it, I know, I know, but I like the photo.

Adding some crystals to the incense is quite handy for sending of a specific charge into the air. It depends on the ceremony what you would add but Quartz goes well with most. Amethyst or Rose Quartz with Venus orientated ceremonies, Obsidian for banishing bad energies, Citrine for Saturn, Moonstone for the Moon, Bloodstone for Mars etc.You get the idea. Make sure you don't put much in with them though because they can crack which isn't good. 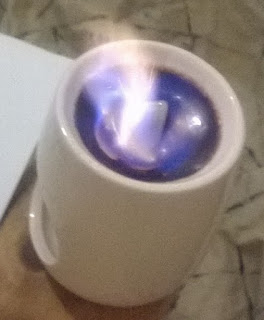 Posted by Ash' Bracken | Tolka Scrolls at 03:41 No comments: